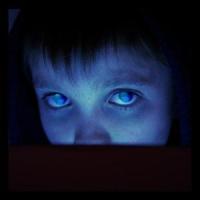 In the late ’60s and early ’70s, bands like King Crimson, Genesis and Yes were fusing disparate genres of music to create their own unique sound. The label “progressive rock” was eventually applied to the music of these bands, and despite it being a catch-all term for multi-genre rock, it eventually came to describe music with certain qualities (e.g. epic-length tracks, symphonic and/or jazz influences, virtuosity and soloing, whimsical and/or philosophic lyrics, etc.).

When the second- and third-generation progressive rock groups formed in the ’80s and ’90s (such as Marillion and Spock’s Beard, for example), they used the sound that had previously been associated with “prog” as their starting point, but largely abandoned the progressive spirit. Porcupine Tree, however, were different: Steven Wilson (the creative force behind the band) is interested in making good, intelligent music, not “progressive” music, and because of that, ironically, Porcupine Tree are at the forefront of the genre.

Their new album, Fear of a Blank Planet, is not a quantum leap for the band or progressive rock in general. What it is, however, is an excellent encapsulation of the styles explored by Wilson & co. over their career, all delivered in the form of a 50-minute concept album.

Wilson has always been in love with the album format, and even more so than most Porcupine Tree albums, Fear… feels like a unified whole. This is both its blessing and its curse, because (initially, at least) it simultaneously feels both too long and too short. There are no three-and-a-half minute songs here — the shortest track is 5:07 and the longest, the epic “Anesthetize”, clocks-in at almost 18 minutes, so nothing’s immediately digestible. On the other hand, with only six tracks all-told, you’re left with a feeling of “Is that it?”

Upon a first listen, the album feels overwhelming, like there’s too much to take in, but further spins reveal the details of production that keep drawing you back — the string arrangements in “My Ashes” and “Sleep Together” or the psychedelic keyboard textures scattered throughout the second half of the title track, for example. There’s so much going on here that, even after the 20th play, you’ll still be discovering new dimensions.

The music itself is difficult to describe adequately, but that’s the whole point. Blending elements of pop, metal, psychedelia, industrial, ambient and symphonic rock may start to give you an idea, but it’s really much more. This is some of the most beautiful music Porcupine Tree have produced, as well as some of the harshest. Guest appearances by Robert Fripp (King Crimson) and Alex Lifeson (Rush) add some interest to the mix, but the cameos never detract or distract from the album, instead giving some variety to the sound.

The lyrics, while occasionally strained and awkward, see Wilson being much more pointed and acerbic than usual, seemingly channelling Roger Waters through Tony Banks. The theme can be summed up as the apathy of the iGeneration, and while not directly critical, Wilson’s observations on a generation numb to life are nonetheless generally bleak andcynical. Whether this will win over young listeners or alienate them is difficult to say, but it’s hard not to suspect that the irony will be lost on your average 15 year old. (Apparently, he was inspired by a novel by Bret Easton Ellis, which explains a lot, really.)

It’s far too early to call Fear of a Blank Planet a classic — ask me again in ten years time — but it’s sure to be one of the best albums of the year. Anyone who cares about good music deserves to hear it at least once.

This entry was posted on Monday, April 30th, 2007 at 11:40 am and is filed under General. You can follow any responses to this entry through the RSS 2.0 feed. You can leave a response, or trackback from your own site.

5 Responses to Porcupine Tree: Fear of a Blank Planet