I CAN HAS STINGRAY 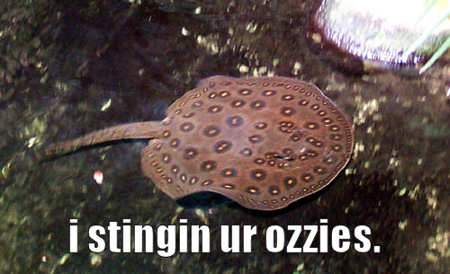 Finally, after a year-long silence, the skipper of the support vessel Deepstar, Pete West, has courageously spoken up and revealed all the juicy details of Steve Irwin’s untimely demise.

Surprisingly, the footage shows only a trickle of blood trailing from Irwin’s chest after the stingray struck him through the heart.

He appears to clutch at his chest for a moment as he goes into cardiac arrest.

That the Crocodile Hunter could be mortally wounded only becomes apparent as the khaki-clad conservationist floats motionless in the water.

“It was not that obvious,” said Mr West…

Of course, the amount of bleeding — probably the only detail that wasn’t either already known or easily surmised — was one of those tidbits I’ve been hanging out for. Thanks, Pete!

“The footage shows him swimming in the water, the ray stopped and turned and that was it.”

“If it hit him anywhere else we would not be talking about a fatality.”

If it hit him in the crotch, we’d be watching the footage on Funniest Home Video Show instead.

This entry was posted on Tuesday, September 4th, 2007 at 3:31 pm and is filed under Celebrities, Steve Irwin. You can follow any responses to this entry through the RSS 2.0 feed. You can leave a response, or trackback from your own site.

2 Responses to I CAN HAS STINGRAY